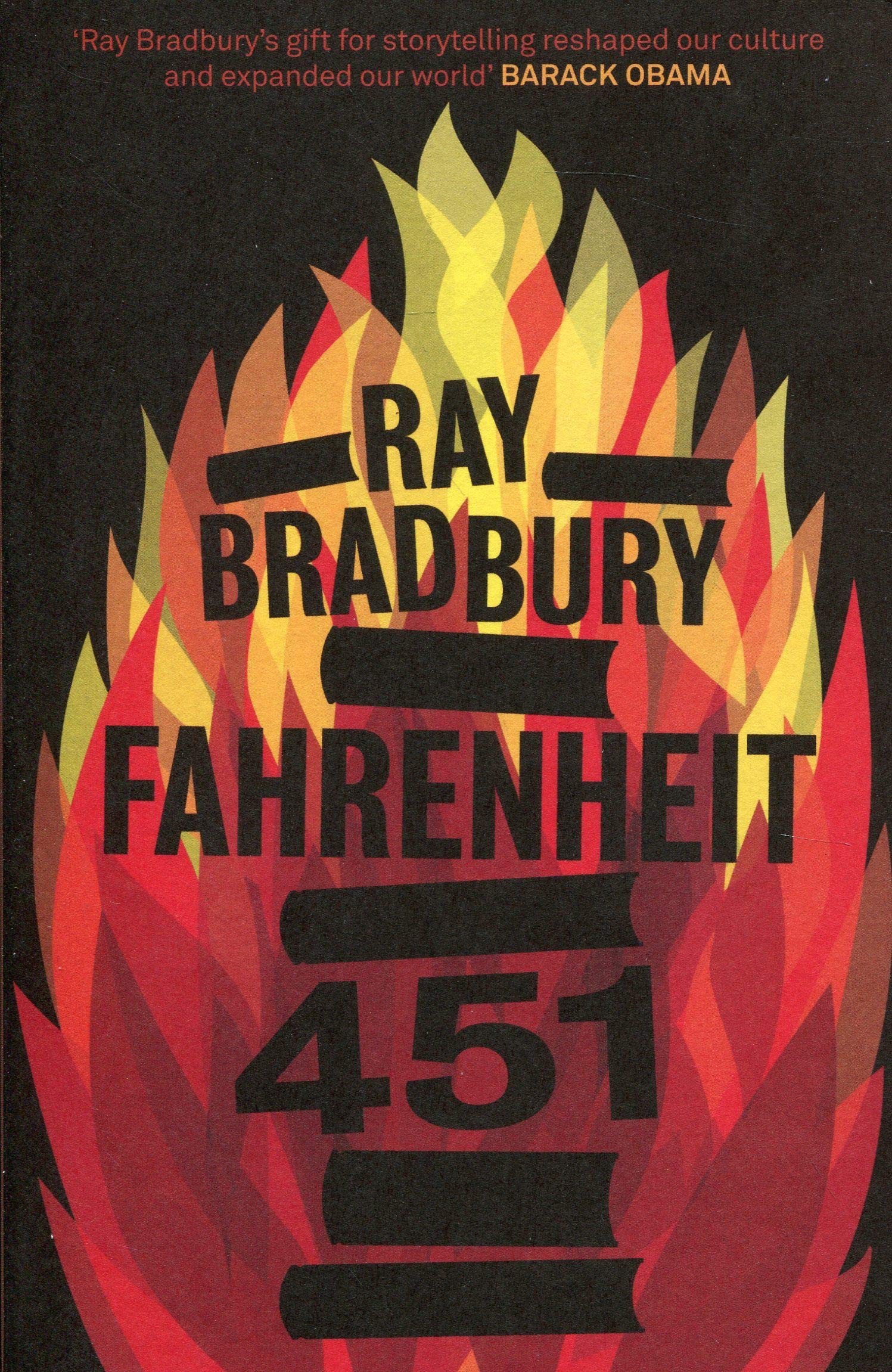 The hauntingly prophetic classic novel set in a not-too-distant future where books are burned by a special task force of firemen. Guy Montag is a fireman. His job is to burn books, which are forbidden, being the source of all discord and unhappiness., Even so, Montag is unhappy; there is discord in his marriage. Are books hidden in his house? The Mechanical Hound of the Fire Department, armed with a lethal hypodermic, escorted by helicopters, is ready to track down those dissidents who defy society to preserve and read books. The classic novel of a post-literate future, `Fahrenheit 451′ stands alongside Orwell’s `1984′ and Huxley’s `Brave New World’ as a prophetic account of Western civilization’s enslavement by the media, drugs and conformity., Bradbury’s powerful and poetic prose combines with uncanny insight into the possibility of technology to create a novel which over fifty years from first publication, still has the power to dazzle and shock.
In Fahrenheit 451, Ray Bradbury’s classic, frightening vision of the future, firemen don’t put out fires–they start them to be able to burn books. Bradbury’s vividly painted society holds up the appearance of happiness as the highest goal–a place where trivial information is good, and knowledge and ideas are bad. Fire Captain Beatty explains it this way, “Give the people contests they win by remembering the words to more popular songs…. Don’t give them slippery stuff like philosophy or sociology to tie things up with. That way lies melancholy.”

Guy Montag is a book-burning fireman undergoing a crisis of faith. His wife spends all day with her television “family”, imploring Montag to work harder so that they are able to come up with the money for a fourth TV wall. Their dull, empty life sharply contrasts with that of his next-door neighbour Clarisse, a young girl thrilled by the ideas in books, and more interested in what she can see on this planet around her than in the mindless chatter of the tube. When Clarisse disappears mysteriously, Montag is moved to make some changes, and starts hiding books in his home. Eventually, his wife turns him in, and he will have to answer the call to burn his secret cache of books. After fleeing to avoid arrest, Montag winds up joining an outlaw band of scholars who keep the contents of books in their heads, waiting for the time society will once again need the wisdom of literature.

Bradbury–the writer of more than 500 short stories, novels, plays and poems–including The Martian Chroniclesand The Illustrated Man–is the winner of many awards, including the Grand Master Award from the Science Fiction Writers of The usa. Readers aged 13 to 93 will be swept up in the harrowing suspense of Fahrenheit 451, and no doubt will sign up for the hordes of Bradbury fans around the world. —Neil Roseman
New
Mint Condition
Dispatch same day for order received before 12 noon
Guaranteed packaging
No quibbles returns