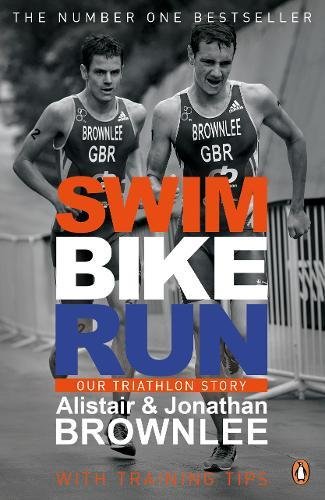 Swim, Bike, Run – The ultimate guide to triathlon by Olympics heroes Alistair and Jonathan BrownleeA Number One Bestseller This is the story of how two skinny lads from west Yorkshire became the most productive triathletes on this planet.Meet the Brownlees: Olympic Champion Alistair, World Champion Jonny. Brothers, training partners, rivals. They have got obliterated the competition and set new standards for swimming, biking and running.In this revealing, steadily very funny book they take us inside their world., It is both a riveting story of the races, the success and the brotherly rivalry, in addition to a guide to triathlon with sections on how one can swim, bike and run and packed with advice on nutrition, injury, and mental approach.This book will appeal to readers of cycling and running books like Mark Cavendish’s Boy Racer and Running with the Kenyans, in addition to fans of Chrissie Wellington’s A Life Without Limits and Andy Beckett’s Can’t Swim, Can’t Bike, Can’t Run.’Sport has two new heroes: a few nice lads from Yorkshire’ The TimesAlistair Brownlee, 24, is a British triathlete from Yorkshire. He’s the reigning Olympic champion, a back-to-back European champion and a two-time World champion. Jonathan Brownlee, 22, could also be a British triathlete from Yorkshire., He’s the reigning World Champion, a two-time World Sprint champion and an Olympic bronze medalist.

Be the first to review “Swim, Bike, Run: Our Triathlon Story” Cancel reply