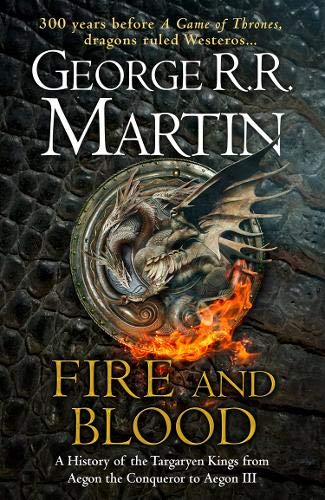 Fire and Blood: 300 Years Before A Game of Thrones (A Targaryen History): A History of the Targaryen Kings from Aegon…

Centuries before the events of A Game of Thrones, House Targaryen – the only family of dragonlords to continue to exist the Doom of Valyria – took up residence on Dragonstone. Set 300 years before the events in A Song of Ice and Fire, Fire and Blood is the definitive history of the Targaryens in Westeros as told by Archmaester Gyldayn, and chronicles the conquest that united the Seven Kingdoms under Targaryen rule through the Dance of the Dragons: the Targaryen civil war that nearly ended their dynasty endlessly. Fire and Blood begins their tale with the legendary Aegon the Conqueror, author of the Iron Throne, and goes on to recount the generations of Targaryens who fought to hold that iconic seat, all of the way up to the civil war that nearly tore their dynasty apart. The thrilling history of the Targaryens comes to life in this masterly work by the Creator of A Song of Ice and Fire, the inspiration for HBO’s Game of Thrones. About the Creator:George R. R. Martin is the bestselling fantasy Creator at the back of the ground-breaking series ‘A Song of Ice and Fire’. The television adaptation of this series ‘Game of Thrones’ has grown into some of the captivating TV shows of all time. Martin has also written accompanying literature to A Song of Ice and Fire, Fevre Dream – the ultimate sci-fi horror novel, in addition to several collections of short stories and scripts for television. Time magazine labelled him as one of the crucial top 100 most influential people on the earth. Product Information: ISBN: 9780008307738 Creator: George R. R. Martin Publisher: Harper Collins Format: Hardback Pages: 736 Dimensions: 24 x 15.9 x 6.3cm

Be the first to review “Fire and Blood: 300 Years Before A Game of Thrones (A Targaryen History): A History of the Targaryen Kings from Aegon…” Cancel reply